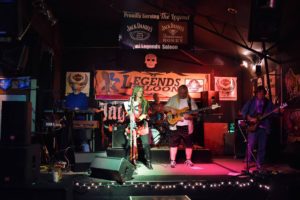 Paper Jam started as a group of copier tech’s getting together to  jam @ parties and holidays.

Jim, Mike, and Bill first got together around 1996. Sometime around 2000 Bill moved to Florida and it was Jim and Mike. They played as 2 guys and an amp for about 3 years.

Tom joined the band on rhythm guitar in 2009.

Early in 2010 ago Eric suffered a broken thumb in a bike accident and he did not return to the group.

In 2010, Bruce joined the band as lead guitarist and Susie joined as background vocals and harmonica.

In 2011, Dan joined us on Drums and Tom R. on Bass.  In November, Bruce and Susie left the band and Carrie joined us on vocals.  In 2012, Tom joined us on lead guitar.

Our current line up is:

Carrie on vocals.
Don on lead guitar and vocals,
Bruce on Bass
Keith on drums,
Tom on rhythm guitar and keyboards, sound and DJ,

For More info go to www.paperjamband.com

Black Dog DJ & Sound – we specialize in music from the British Invasion, 60’s and70’s music with a personal touch.

Rekindle those memories and relive those early days of Rock and Roll during your Corporate Events, Parties, Reunions, Karaoke and other events.